Raccoons Raiding Garbage Cans: Raccoons have learned, through adapting to human habitat, that garbage cans are excellent sources of food. To raccoon-proof a garbage can, fasten the lid securely with rope, bungee cords, chain, or even weights. To prevent cans from being knocked over and rolled around, secure the handle to a metal or wooden stake driven into the ground. Store garbage cans in wooden bins or in a shed or garage to limit raccoon access. As a last effort, place an inch or so of ammonia-soaked newspaper or rags in the bottom of the garbage can and sprinkle cayenne pepper on top of the garbage to discourage raccoons. Handle ammonia carefully, and keep in mind that it is toxic to children and animals. The ammonia is intended to deter raccoons with its odor, not to injure them.

Raccoons on Porch or in Yard: Fear of Threat to Humans or Pets. Raccoons, like humans, are constantly tending to the basic needs for food and shelter. They find both near us. While they may be just curious, they are probably in search of food and usually are not aggressive unless cornered, mating, or with young. Send them off with a good dousing of water from the hose or a bucket of water. Instruct and remind children not to approach, touch or feed them. Raccoons seldom bother cats unless the cat is territorial and aggressive. Kittens, especially if out at night, may be seen as prey. Store pet food in heavy-duty plastic containers with tamper-resistant lids. Try talking to your neighbors, one of more of whom may deliberately feed raccoons because they are so cute. Try to discourage this practice by reminding neighbors not to leave out pet food dishes and to store pet food securely. Use pet doors at your own risk. Lock them at night, if possible, or you may be surprised to discover that a skunk, opossum, or raccoon has invited itself into your home. Some newer models can be opened only by pets wearing a special magnetic collar.

Raccoons in the House: Occasionally a raccoon will find its way into a house through a pet door or chimney and be unable to find its way out. A panicked raccoon can cause extensive damage, so close doors to all other rooms in the house, open doors and windows to the outside and leave the house. Wait quietly for the raccoon to find its way out. Do not use food as a lure; this will make wildlife associate food with humans and return for more. If the raccoon has not left in a reasonable period of time, call your local wildlife agency. Only professionally trained wildlife workers should attempt capture (as opposed to live-trapping) of raccoons.

Raccoons Under the House or Deck: In the mating and nesting season, these animals are especially attracted to warm, dry, dark, and easily defended areas for temporary homes. The deterrents listed here should never be used during baby season as they may prevent the mother from returning, resulting in orphaned, starving babies. Limit and eliminate access by following these steps:

Raccoons in the Attic or on the Roof: Attics and roofs can be good nesting locations from a raccoons point of view. The following deterrents should never be used during baby season as they may prevent the mother from returning, resulting in orphaned, starving babies.

Limit access by following the steps under Raccoons Under the House or Deck. Unless the roof is easily accessible to you, you may have to forgo the flour tracking and depend on the other steps. Be sure to keep replenishing the ammonia until you no longer hear sounds in the attic; then close the opening.

Remove trellises, vines, shrubs, tree limbs or other objects that may give animals a route to the roof or attic. Wrap tree trunks with 2-foot wide sheet metal, positioning it at least 2 feet above the ground to prevent raccoons from jumping over the barrier and climbing trees for access to buildings.

Raccoons in the Chimney: Raccoons will den in uncapped chimneys and even sometimes bear young there. They will use the fireplace flue because of the smoke shelf.

Prevent entry by capping chimneys with a commercial chimney cap, wire mesh, or other cover.

If a raccoon is in your chimney, place a small bowl of ammonia at the base of the chimney so the fumes will carry upward. (Close fireplace doors or set a barrier across the opening to control odor and prevent the raccoon from exiting via the house.) Or lower a bag filled with mothballs or rags soaked in ammonia from the top. Be sure to leave the top open so the animal can climb out. Make sure that kits are not in the chimney. If they should be disturbed (and ammonia should not be used) as this may prevent the mother from returning.

Orphaned Baby Raccoons: It is normal for raccoon mothers to leave their young in order to hunt. It is also normal for kits to whine and cry like puppies.

Unless you can observe the area for many hours, it is difficult to determine whether the mother is truly missing or just temporarily away. If the young cry continuously, with no quiet periods during which the mother may be feeding them, call Project Wildlife or another local wildlife agency to get further information on evaluating the situation.

Raccoons in the Garden or Fruit Trees: Raccoons are good climbers and relish fruit, but they may break branches and compete with the growers enjoyment of his or her crop. Raccoons also like to help themselves to grapes and corn just before they are ready for picking.

Raccoons in Ponds, Hot Tubs, and Pools: Raccoons are attracted to water because they associate it with fish and other prey in the wild. *Cover hot tubs and pools at night when animals are active.

Raccoons Digging Up Garden Plants and Lawn: Raccoons dig in search of worms, insects and grubs tiny, wormlike larval stages of insects that live in lawns. The good news is that they wont eat your plants. The bad news is that they will dig them up to get at the food source in the soil below.

Squirrel?! Yep that’s right it’s National Squirrel Appreciation Day!
Squirrels are often the under appreciated animals of the animal kingdom. They play an important role in our ecosystem by planting and storing huge numbers of nuts and seeds and because they plant more than they eat, many turn into trees. Squirrels are essentially nature’s little gardeners!
When you see them out in the wild, please just enjoy their zany behaviors from afar but avoid the temptation of feeding them. They are wild animals and any feeding can alter their natural behavior and diet. Feeding squirrels can lead to their becoming dependent on handouts and even growing aggressive towards people. Too often, the foods offered are unhealthy and can lead to problems such as obesity and tooth decay.
So while you admire their agility and astounding acrobatics, remember they are making significant contributions to the landscape and our environment. 🌎 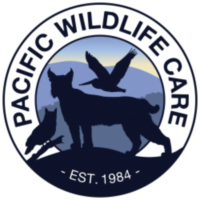 Our mission is to support San Luis Obispo County wildlife through rehabilitation and educational outreach.